Maven Releases on Steroids (3): Rounding it up with Jenkins

Update: I updated this article in 2013 as Maven Release Plugin: The Final Nail in the Coffin
In Part 2, we looked at what changes where necessary to the Maven POMs to make it all work.

In this final part, we'll put the finishing touch by choosing a version number strategy and integrating what we have so far with Jenkins.

A good version number has a number of properties:

Typical candidates can be:

We must now find one we can use. Luckily for us, it turns out Jenkins has a very useful feature for this. During each build Jenkins exposes a number of environments variables. A few of these are particularly interesting:


In this article, we''ll use the BUILD_NUMBER variable as a version number for our releases. We could have used one of the others as well, but this one fits our need perfectly: a fine machine-incremented number with a natural order supported by Maven.

The first thing to do is to set up a new Maven 2/3 project.

In this project you must 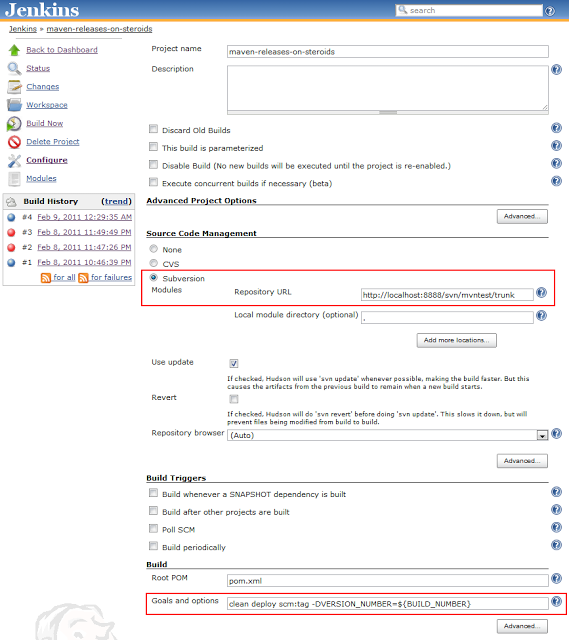 And that's it! Every time this job is run, a new release is produced, the artifacts will be deployed and the source code will be tagged. The version of the release will be the BUILD_NUMBER of the Jenkins project. Nice and simple.


A small note for Nexus users:

In order to allow Maven to upload the corrected POMs from Part 2 of this article, you need to set the Deployment Policy of the Releases repository to Allow Redeploy. 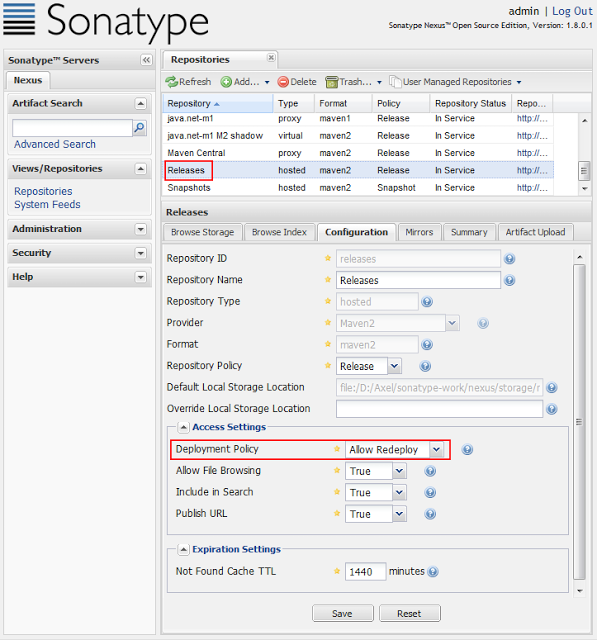 You're now ready to add a build trigger on SCM changes in Jenkins. Once you have this,every commit causing a green build will produce a new release. It's the next step up.

Last, but not least, here is a sample multi-module Maven Project with all the POMs correctly set up available for download.

Looking back at the workflow of the Release Plugin we discussed in Part 1, we have come a long way!

If you're willing to live with 3 simple things:

you can now enjoy very fast (3x) and robust releases, without the headaches of the Release Plugin.

Axel Fontaine is the founder and CEO of Boxfuse the easiest way to deploy JVM and Node.js applications to AWS.

Axel is also the creator and project lead of Flyway, the open-source tool that makes database migration easy.

He is a Continuous Delivery and Immutable Infrastructure expert, a Java Champion, a JavaOne Rockstar and a regular speaker at many large international conferences including JavaOne, Devoxx, Jfokus, JavaZone, QCon, JAX, ...

Thanks! I'll be in touch shorty.

Thanks! Your message looked like spam.
My good friend /dev/null will be in touch shorty.